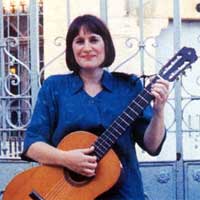 Betty Klein, international folksinger, pianist, guitarist, harpist and accordionist has performed in the U.S., Europe, and Israel. She appeared on the BBC, Belgian, Israeli, Spanish and Italian radio and television. She performs at the Disapora Museum and conducts Yiddish sing alongs through Israel.

American-born, Israeli singer, guitarist, pianist harpist, accordionist and music therapist. She studied with Martha Schlamme at Mannes College, graduated with a BS from Boston University, MS from Columbia University and continued studies at Hunter College and Montclair State College. She performed throughout the New York area until moving to Israel. She participated in the Akko Music Festival, Folk Festival at Horshat Tal and the Llangollen Eisteddfod, Wales in 1990 where she won 2nd prize in the solo folk singing competition. Ms. Klein has appeared on the BBC, Belgian TV and radio programs and on Israeli TV and radio. Her Ladino and Yiddish concerts have been broadcast as well as recorded in albums. She has performed extensively in Europe in both Jewish and general venues, including festivals, universities, and the Vatican. She is well known also for her Ladino, and also performs as an accompanist to Shuly Nathan and with the Israeli Andalusian Orchestra. In 2003 she received the prize for music composition with the FestiLadino (International Ladino Song Festival). Klein has several recordings released of Yiddish, Ladino and Hebrew music.