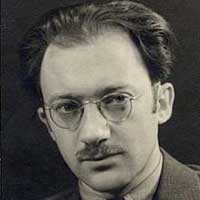 Yiddish-language poet whose works chronicle his childhood in Siberia, his life in the Vilna (Vilnius) ghetto during World War II, and his escape to join Jewish partisans. After the Holocaust he became a major figure in Yiddish letters in Israel and throughout the world.

In 1915 Sutzkever and his family fled their home in White Russia to Siberia to escape World War I; they returned to the region in 1920 and lived near Vilna, where Sutzkever later studied literary criticism at the University of Vilna. He began writing poetry in Hebrew around 1927. He was influenced by intellectual thought at the Yiddish Scientific Institute (what would later become the YIVO Institute for Jewish Research) and became associated with Yung Vilne (“Young Vilna”), a group of aspiring Yiddish writers living in Vilna. A poet who celebrated nature, beauty, and language, Sutzkever was artistically and ideologically at odds with this group, whose work reflected a more urban, leftist orientation.

Early in his career he contributed to the American Modernist poetry journal In zikh (“In Oneself” or “Introspection”). His first published collection, Lider (1937; “Songs”), received critical acclaim, praised for its innovative imagery, language, and form. His collection Valdiks (1940; “Sylvan”) celebrates nature. Di festung (1945; “The Fortress”) reflects his experiences as a member of the ghetto resistance movement in Belorussia (Belarus) and his service with Jewish partisans during World War II. Sutzkever was also a central cultural figure in the Vilna ghetto, where he organized and inspired revues, exhibitions, lectures, and poetry readings during the war. He was a member of the “Paper Brigade,” a group of Jewish intellectuals chosen to select Jewish cultural artifacts to be sent to the Institute for the Investigation of the Jewish Question, founded by Nazi ideologist Alfred Rosenberg; the remainder was sold for pulp. Both during and immediately after the war, Sutzkever led the effort to save for the Jews whatever could be rescued, first from the Nazis and then from the Soviets. His efforts were not in vain; thousands of volumes and documents survived and were eventually reclaimed in the 1990s by the YIVO Institute for Jewish Research.

Sutzkever returned to Poland in 1946 and then lived briefly in France and The Netherlands. In 1946 he testified at the Nürnberg trials, and in 1947 he settled in Palestine (later Israel), where from 1949 to 1995 he edited Di goldene keyt (“The Golden Chain”), a Yiddish literary journal.

The prose volume Fun Vilner geto (1946; “From the Vilna Ghetto”), the poetry collections Lider fun geto (1946; “Songs from the Ghetto”), Geheymshtot (1948; “Secret City”), and Yidishe gas (1948; “Jewish Street”), and the volume of prose poetry Griner akvaryum (1975; “Green Aquarium”) are all based on his experiences during World War II. Sibir (1953; Siberia) recalls his early childhood. Sutzkever’s other collections of poetry include In midber Sinai (1957; In the Sinai Desert), Di fidlroyz (1974; The Fiddle Rose: Poems 1970–1972), and Fun alte un yunge ksav-yadn (1982; Laughter Beneath the Forest: Poems from Old and New Manuscripts). Burnt Pearls: Ghetto Poems of Abraham Sutzkever (1981), A. Sutzkever: Selected Poetry and Prose (1991), and Beneath the Trees (2003) are collections of his work in English translation.