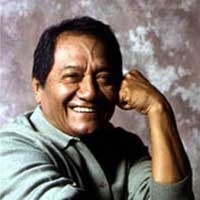 Armando Manzanero was born in Mérida, Yucatán, in Southeastern Mexico on December 7, 1935.

At age 8 he began studying music at the Escuela de Bellas Artes in Mérida. Then at only 16, he started working professionally as a pianist in 1951.

In 1957, he relocated to Mexico City where in addition to rounding off his musical training he worked as a musical promoting in the editing room at EMI and musical director at CBS International.

Soon afterward he became a pianist of such stature as that held by the likes of greats Pedro Vargas, Lucho Gatica, Carmela and Rafael.

His first song, “Nunca en el mundo” dates back to 1950 and has been reworked into 21 different covers to date.

In 1957, Boby Capó recorded “Llorando estoy,” while Lucho Gatica did the same with one of his best known songs, “Voy a apagar la luz.” With these melodies he initiated his international recognition as a composer.

In 1959 he recorded his first record with melodies written from his own inspiration, Mi primera grabación. 10 years later Carlos Lico landed his ballad “No” in the top spots on the Latin America charts.

To date Armanda Manzanero has written more than 400 songs, 50 of which have grasped international fame, including “Voy a apagar la luz,” “Esta tarde vi llover,” “Adoro,” “No,” “Contigo aprendí,” “Cuando estoy contigo,” “Como yo te amé,” “No sé tú,” “Parece que fue ayer,” “Te extraño,” “Felicidad,” “Yo te recuerdo” and “Somos novios.”, which its English version became also a worldwide hit as “It’s Impossible”. Having released more than 30 CDs, he has taken part in productions for various artists like Angélica María, Amaya, Dyango, María Conchita Alonso, Manuella Torres, with featured production in Romance and co-production for the CD Romance II, both by Luis Miguel. Many of his songs have risen above linguistic barriers, getting performed by artists like Frank Sinatra, Tony Bennet, Elvis Presley and Perry Como. His composer, producer and performer work still continue still continue to this day.