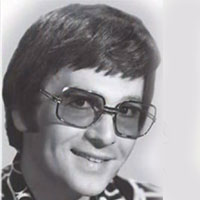 A Greek (non-Jewish) singer who arrived in Israel as a young man in 1957 and within five years became a megastar, club owner, close friend of IDF commanders and politicians, and lover of countless movie actresses and singers. In Israelof the 1960s, everyone was singing Aris’s hits “Sigal” and “Boom pam” and the gossip columns were full of his forbidden love affair with singer Aliza Azikri. For his fans, Aris was the perfect combination of east and west. Then began the rumors that Aris was a spy, and stories of violence between him and Aliza.

Aris left Israel and set out to conquer America. He opened a hot nightclub in New York where Hollywood stars, politicians, and mafiosos basked in the light of the singer who hid behind an artificial wig, huge glasses, white suits, gold rings, and a guitar. His friends included Anthony Quinn, Telly Savalas, Harry Belafonte, as well as the Gallo crime family. Aris thought that he had found the key to success, but at the end of his meteoric rise came his fall, flight, and mysterious end in Budapest.