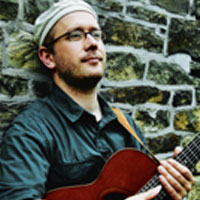 Andreas Schmitges (guitar, vocals, mandolin, dance) has been an active member of the klezmer scene for several years and has been working in this field as a musician, author, researcher and dancer. He studied Jazz in Maastricht (NL) with Joep van Leeuwen and at the Musikhochschule Köln with Prof. Frank Haunschild where he also completed his thesis, entitled: ‘Klezmer and Jazz – Points of connection’. Since then, his contributions on North American Klezmer Music have been featured in the acclaimed ‘Klezmerwelten’ Exhibition ‘Klezmer heymish and hip’ which is still travelling around Europe.

Andreas has been a freelancing klezmer musician since 1999 during which time he has attended Klezmer-Workshops and Yiddish Courses in London, Weimar and New York. Andreas works regularily as a teacher for Yiddish Dance at Festivals in New York (KLezKamp), London, Kiev, Odessa and Weimar and has given concerts, dance- and klezmer-workshops at almost all the festivals of Jewish and Yiddish culture in Germany, including Berlin, Munich, Gelsenkirchen, Dresden and Fürth. Andreas has performed internationally in Paris, London and Amsterdam with his bands ‘A Tickle In The Heart’ and ‘Klezmer Alliance’. His highly successful collaboration with Yiddish storyteller and teacher Pesakh Fiszman from New York in a Yiddish Music & Language Programme has won high acclaim.