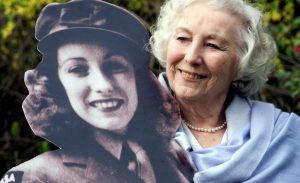 Vera Lynn, the voice of resistance against the Nazis, dies

Vera Lynn, who sang the songs that touched the hearts and lifted the spirits of Britons from the bomb-blitzed streets of London and Coventry to the sands of North Africa and the jungles of Burma during World War II, died on Thursday at her home in Sussex, England. She was 103. Her death was confirmed […]