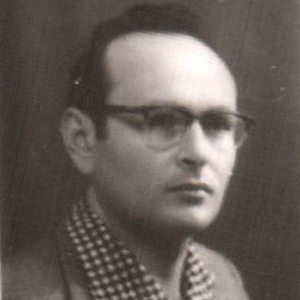 Yosef Hadar was born in Tel Aviv in 1926 to a musical family. His mother Yafa and his father Yehiel were both members of the Israeli Opera under Golinkin, and of the Tel Aviv Choir under Joel Engel. Hadar absorbed both classical/operatic repertoire and contemporary Israeli repertoire from his parents.

At the age of seven, Hadar’s family moved to the Borochov neighborhood in Givatayim. There he began vocal training under Daniel Samburski, in addition to studying the violin. At the age of fourteen, while attending Ohel Shem High School, Hadar founded a string orchestra which consisted of violins, mandolins and a solo harmonica played by Shabtay Portugaly, a famous piano tuner of the day. After graduating from high school, Hadar volunteered for the ‘Notrim’ police unit. During the War of Independence he participated in the Battle of Latrun and in Operation Hiram, as well as serving as a culture officer and as a singing instructor.

His acquaintance with composer Emanuel Amiran-Pugatchov brought Hadar to the College for Music Educators (Midrasha Lemichanchim Lemusica), which was then run by Prof. Leo Kestenberg and Emanuel Amiran. There he studied from 1949 to 1953 and was among the first graduating class. Among his teachers at the school were Kata Ya’akov, Moshe Dafna and Prof. Shlomo Hoffman. Apart from his studies at school, Hadar took private lessons with Mordechai Seter, Paul Ben-Haim and Israeli Philharmonic Orchestra violin player Shlomo Bor. Hadar returned to Ohel Shem High School to teach, and he also taught at the Yahalom School. After the retirement of Yitzhak Graziani, Hadar was appointed conductor and manager of the Children’s Choir of Ramat-Gan. In the sixties he established the city’s men’s choir.

In 1974, Hadar moved to Arad where he lived for five years. While in Arad, he established children’s and men’s choirs, as well as an orchestra. In addition, he organized practice and performance venues for his groups, while all the while teaching in several schools.

In 1990, Hadar won the ACUM ‘Golden Feather’ award for Lifetime Achievment. In 1998, he won the title, ‘Yakir Hair’ (treasured citizen) in Ramat Gan. In 2006, at the fourth “Mi Ani Shir Yisraeli” convention, he won an achievement award for his contribution to Israeli folk song as a composer and as a musical educator. The award was granted to him by the Center for Israeli Folk Music at Bar Ilan University division of culture, by music of Army Radio, and by ‘Omanut Laam’.

Yosef Hadar was musically active until 2002 and died at his home in Even Yehuda in the summer of 2006.

Most of the well known children songs of the sixties were recorded by Hadar with the help of the Hed-Arzi record company. These recordings included singers Miriam Avigal, Dalya Amihud, Miryam Props, and Tova Ben-Zvi, as well as four to six musicians, and the Yahalom children’s choir.

Yosef Hadar is known as the “duo composer.” He composed for many duo’s that became popular in the fifties and sixties. Among the duo’s that sang his songs were: Hadudaim; Tzemed Hagitarot (The Guitar Duo); Ha’Amaranim; Tzemed Duron; Tzemed Ha’almogim (The Corals Duo); Tzlilei Zabar (Zabar Sounds); and Ilka and Aviva. In addition to composing, Hadar established a number of choirs, to name a few: Ramat-Gan Choir; Kiryat Ono Choir; Holon Choir; Teachers Union Choir; Arad Choir; Children of Tel Aviv-Yafo Choir; and Kefar Shemaryahu Choir.

Following the War of Independence, Hadar wrote his first song, “El Ha’ayin,” in cooperation with Uriel Ofek, his friend from the Borochov neighborhood. He would go on to compose another 240 songs. Among these are songs sung all over the world by well-known folk singers such as: the Cuban singers; The Weavers; Pitt Seager; Harry Belafonte; Miriam Makeba; Amalia Rodriguez; Nana Mouskouri; Paco Ibanez; and Los Paraquayos. Among his most famous songs: Erev Shel Shoshanim; Shir Hanokdim; Tapuach Hinani; Levav Enosh; Belev Haleil; Brach Hamelech; Shnei Hayalim; Shuva Elay; Behar Gilboa; Keshoshana ben Hahohim.

His song ‘Erev Shel Shoshanim’ has earned widespread acclaim. It has been sung in many languages and has even entered the repertoire of liturgical prayer melodies. Many synagogues use the melody to sing the piyut, “Lecha Dodi” during the ‘Kabalat Shabbat’ prayer on Friday night, and the tune is widely used at weddings when the bride enters the canopy. The song is used in the Christian prayer as Hymn No. 15 in the Lutheranian Church in northern Europe.

Some of Hadar’s compositions have become established folk songs and constitute the core of the popular Israeli music genre.