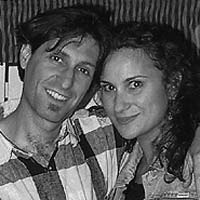 Yale Strom was born in Detroit and moved to San Diego, at the age of twelve, he is the oldest of nine children (eight surviving). Yale was always on the go; orchestra rehearsals, cross-country training, Hebrew school, baseball, basketball, marching in picket-lines and pushing his younger siblings in the stroller. He went to undergraduate school at San Diego State University where he ran collegiate cross-country and track. He finished his studies there earning two BA’s; one in American Studies and the other in Furniture Design.


Between painting, carpet cleaning, gardening and music gigs Yale enjoyed life as an early Eighties slacker. Then one evening he went to a klezmer dance in a downtown club in San Diego, and had the time of his life. He asked if he could join the band and the band leader basically said: “Don’t call us we’ll call you.” He went home and decided that San Diego was big enough for two klezmer bands and he would make his unique.


The next day he called the law schools he was to attend that coming September announcing in Yiddish he would not be showing up. He then proceeded and called to make reservations for a one way ticket to Eastern Europe. He decided that he was going to trek around the “Eastern Bloc” looking for unknown, unrecorded klezmer melodies among the remnant Jewish communities.


During the last fifteen years Yale has been researching the Jewish and Rom (Gypsy) communities of Eastern Europe, the Mediterrenean and Balkan lands. His work has resulted in six photo-documentary books:

The documentary films are available on video through his distributor

His music, including a soundtrack of CARPATI, is available through


Yale became a Mensch once again when he graduated from Columbia University with a graduate degree in Yiddish Studies. He has recently married and can be seen in the photo above with his ‘Neshama’ Elizabeth. Yale in currently working on an original play for The San Diego Repertory Theatre and a screenplay that will be shot in NYC next May. He is also working on a book on the social history of the klezmer musician in pre-WW II Eastern Europe based upon people’s oral history recollections and family photographs. If you or anyone you know has any memories about a klezmer(s) please contact

In 1996 CARPATI will be screened at the following theatres:

City of the Future: Yiddish Songs From the Former Soviet Union