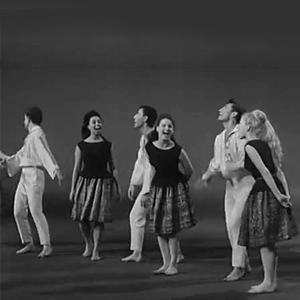 The Karmon Israeli Dancers was a dance group based in Israel, founded by and featuring the choreography of Jonathan (Yonatan) Karmon (b. circa 1932). Karmon was taken to Israel as a child by the Red Cross during World War II, and eventually became a prominent figure in the development of Israeli dance and culture. His work includes organizing dance festivals and cultural events in Israel and Europe, and directing and choreographing Broadway productions based on Israeli culture, in addition to creating the Karmon Israeli Dancers.

In 1958 the Karmon Israeli Dancers debuted in the United States of America on the Ed Sullivan Show, and then began touring Europe, North America and South America, presenting Karmon’s style of modern dance. During the spring and early summer of 1963, the group toured London, Toronto, and New York City in performances presented by notable Broadway producer Alexander H. Cohen. During this time the group was managed by Gil Shiva, who was a principal correspondent with Cohen in organizing the group’s tour.

Jonathan (Yonatan) Karmon was the conceptual artist, the choreographer, and the director of the original broadway musical production of Don’t Step on My Olive Branch about a border settlement in Israel. He also directed and chorographed New Music Hall of Israel that starred Guela Gill; Come Let’s Be Happy; To Live Another Summer, To Pass Another Winter; and Karmon Israeli Dancers. He also was director of the famous dance and singing ensemble Lahakat Karmon and of the Jerusalem Dance Company.

Jonathan Karmon’s 80th birthday was celebrated on Sunday, February 5, 2012 at Pnina Klein’s dance session at Beit Rozen in Ramat Gan. Choreographers, instructors and dancers alike gathered to honor the life and achievements of one of the founders of Israeli Folk Dancing. Miri Akuni, Shlomo Maman, Yaron Meishar, Igaal Triki, and Gadi Biton were just a few of those celebrating.

Folk Songs By The Karmon Israeli Singers And Dancers