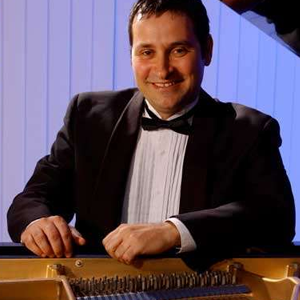 Sergio started to learn the piano when he was six.

My mother was an amateur pianist and she was my first exposure to the instrument. My mom’s family was musical, she had 2 sisters and the three of them played. I was given piano lessons, but I was lucky, because 20 years earlier my cousin Bush was not allowed to study piano due to it being”a lady’s pursuit” and “improper for a boy”.

his first teachers of note were Marcia Freyre and Marcia Freyre de Andrade, two exiled Cuban pianists who used to teach a few blocks from his home in Mexico City.  Sergio won a silver medal as a teen in the Estudio Internacional de Arte.

In 1981 he moved to Los Angeles to study with Mario Feninger and his partner, Ian Brooks, spending four years working with them until he started appearing in concerts in Mexico City. From 1985 to 1988 e appeared in recitals in different venues and also appeared on TV repeatedly, in a TV Show called “Estudio 54”.

In 1988, before leaving for a tour in South America he had an accident injuring his left hand.

I was ready to go on tour to South America, with an appearance scheduled for the Teatro Colon in Buenos Aires, when the injury occured. After that moment, and for a few years, I would not be able to practice more than 15 minutes with my left hand without the wrist swelling. The tour was cancelled and I faced an uncertain future.

My solution to this problem was to take on the repertoire for one hand. I got a hold of pieces written for the right hand, as well as the left hand, and I started learning them. This culminated in appearances in recital , as well as in another series of shows in Estudio 54, on Mexican TV, where I wrote a series of 5 half hour shows called “In Spite of Everything”, in which I performed all the music.

All the time he was playing with one hand, Mario was looking for some way to help him get back to playing with both hands. After three years, he found out about Dorothy Taubman, a teacher from New York.

He decided to attend a two week master class she gave in Amherst. After seeing him, she said he could play again if I relearned to play the piano her way. Taubman also asked hin to drop all the old repertoire and start afresh, because he could relapse into bad habits and risk injury again. In 1995, Sergio started to compose; an event that would change his life again.

I started to get into chamber music, vocal music, choral music, and orchestral music. After a period of 8 years of writing music, in 2003 I decided to embark on my first public project as a composer/pianist by creating a CD called Almost Songs. I learned the pieces and recorded them in 2005, releasing the CD with a concert at Zipper Hall of the Colburn School of Music in Los Angeles, California.

Memories of My Childhood