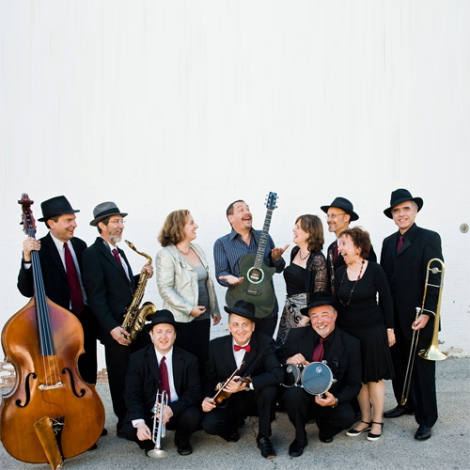 Rabbi Joe Black, the author of the popular holiday song “Judah Maccabee,” joins creative forces with the Maxwell Street Klezmer Band to launch the Hanukkah season together. This is the only Chicago-area performance of their show, “Eight Nights of Joy” – an exuberant synthesis of Rabbi Black’s original songs and dynamic guitar mastery with the energy and creative genius of Chicago’s own klezmer Big Band. This lively hour of music will entertain audiences of all backgrounds and ages.

Rabbi Joe Black is known for his guitar virtuosity, soaring voice, and lyrics that are funny, inspirational, and thought-provoking. A pioneer of Jewish Contemporary music, Rabbi Black has performed for congregations and communities around the world, and his music is played and recorded by many artists. His recordings and books have received accolades from sources as diverse as The New York Times, Hadassah Magazine, Parent’s Choice and The American Library Journal. Rabbi Black has recorded five critically-acclaimed albums of Jewish music including Eight Nights of Joy, recorded live in concert with the Maxwell Street Klezmer Band. An Evanston native, Rabbi Black serves as Senior Rabbi at Temple Emanuel in Denver, Colorado, a position he has held since 2011.

Writer and historian Studs Terkel wrote, “The Maxwell Street Klezmer Band is a joyous celebration of music that was—and fortunately, still is.” Named for Chicago’s colorful Sunday marketplace, Maxwell Street Klezmer Band embodies the spirit of Jewish immigrant America. The band has played at Carnegie Hall and toured Europe. Founded in 1983 by Lori Lippitz, Maxwell Street marked the band’s 30th “Bandiversary” at The Old Town School of Folk Music in 2013. Musical Director and violinist Alex Koffman was recently the soloist with the Chicago Sinfonietta in a classical klezmer composition created for him. The band was featured in 2014 with The Lyric Opera of Chicago in the world’s first klezmer opera, “The Property.” As singer and actor Theodore Bikel said, “These are fine musicians…they care about the music. And when they care—I care.”
The Maxwell Street Klezmer Band is supported by the Klezmer Music Foundation, Inc., an Illinois not-for-profit organization.