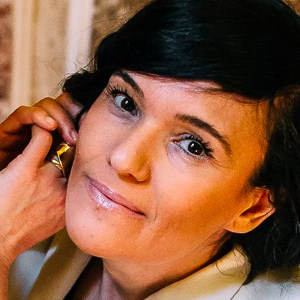 Motivated by her desire to study and research traditional music, she traveled and lived in Crete during 2003 and 2004. In 2005, she returned to Thessaloniki, Greece where she studied folklore, traditional vocals and music in depth. She got to grips with religious Byzantine chant with Drossos Kutsokostas.

It was also in Thessaloniki, -the Jerusalem of the Balkans for the Sephardim-, where she began to complete her repertoire by exploring more the Western perspective due to her proximity to mainland Spain.

Mara Aranda’s research and compilation is reflected in the album “Musiques i Cants Sefardis d’Orient i Occident -Sephardic” music and song from east and west- with Aman Aman titled published by Galileo-mc.

The fact that she moved away from her own roots in a geographical sense made her look back at them with a renewed interest. She started get to grips with traditional song from Valencia “Cant d’estil” through the great singer-songwriter Josep Aparicio ‘Apa’ and went on to perform different television series’ soundtracks too.

In 1998 she put together the group L’Ham de Foc along with Éfren López; a project with Greek, Turkish, Balkan, Arab, Iranian, and Afghan influence, but with a strong Valencian identity. L’Ham de Foc went on to become one of the most internationally acclaimed Spanish groups at the time, bringing together a broad fan base from across the musical spectrum. They managed to reach a diverse audience; enthusiastic and loyal to a musical and artistic style that was different, authentic, adventurous, open and far removed from the conventions of folk, rock and pop. It developed into a unique timeless musical concept without trying to follow other trends. Their compositions grabbed the attention of art professionals and the public alike. Three albums were recorded between 1999 and 2006, all critically acclaimed: U, Cançó de dona i home and Cor de porc.

For two years on Channel 9 Radio-Si Radio in Valencia, she produced, directed and presented the programme Microkosmos dedicated to early and traditional music.

She played the lead in prestigious producer Pyrene’s documentary programme Vinoleum dedicated to Caroig Massif, with photography and texts by Manuel Asensi and music by Joan Manuel Serrat and L’Ham de Foc.

In 2007 she embarked on a fascinating journey with Al Andaluz Project and brought together the strength of its three female vocalists: Sigrid House, Iman Kandousi and Mara Aranda. The each represented three different musical heritages of the three cultures in Spain. The fruits of their efforts can be seen in Deus et Dibolus, Al Maraya and Abuab Al-andaluz, and includes a repertoire inspired by Central European, Sephardic and Andalusian cultures.

In February 2013 the much anticipated album “Sephardic Legacy” sees the light of day, a celebration of the music and song of the Sephardic Jews in the Eastern and Western Mediterranean.