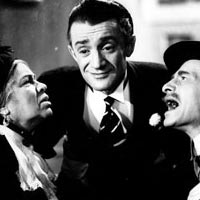 “If you’re telling a gag which you think most of the audience will know, then tell it to the guy who hasn’t heard it before.” This was the advice Leo Fuchs gave me as a young actor in the Grand Palais Yiddish Theatre in the mid-Fifties.

The word “star” is often abused but in Fuchs’s case to call him a great star was fully justified. Not only could his name fill a theatre but he would have his audiences cheering and begging for more.

He was born in 1911 in Warsaw, into a Yiddish theatre family; his father was a character player who died at the early age of 40, his mother a leading lady of the musical theatre who perished in the Holocaust of the 1940s.

Leo Fuchs’s speciality was comedy and when he commenced his career in the Yiddish theatre in Poland in the early Thirties the casting of each play was based on stereotypes – the handsome young hero, the patriarch, the devious villain – and the comedy wasalways in the hands of the hapless little fellow who was constantly henpecked by wife or mother-in-law. Fuchs’s persona was different: he was the put-upon comic who was tall, dark and handsome.

Making his mark when barely out of his teens, he worked in the Polish Revue Theatre. An engagement to appear on the Yiddish stage in New York followed and his originality, acting ability and musicianship (he was an excellent violinist) made him a headliner in Yiddish musical comedy.

Fuchs was rubber-faced and practically double-jointed. He could make his body do the most incredible contortions while playing the violin behind his back and screwing up his face until it was quite unrecognisable; but he always pulled himself up to his full height to make a handsome, smiling exit. He enjoyed equal success when playing a season of classical drama with the Maurice Schwartz Arts Theatre in New York, and featured in many Yiddish films, notably I Want to be a Mother, The American Matchmaker and a number of comedy two-reelers.

Fuchs appeared in London on three different occasions. When one of the London’s two Yiddish theatres moved from their traditional home in the East End to the cavernous Alexander Theatre in Stoke Newington, a 1,500-seater, the resident company had difficult in filling such a large venue and it was decided to import star attractions from the United States.

Fuchs made his debut early in 1948 and immediately filled the theatre to capacity for several weeks with his production of The Galitzianer Cowboy, a traditional Yiddish musical comedy with a Wild West background (hard on the heels of Oklahoma, then filling Drury Lane). Subsequent guest artists did good business but none could match Fuchs’s success.

His second appearance in London was in the late Fifties for a season at the Grand Palais, in the East End. Once again, full houses were the order of the day. He was a selfless performer, never hogging the limelight and always happy to help and advise hiscolleagues; and he took particular pains to nurture young talent. In both London seasons he was partnered by his wife, Rebecca Richman, a charming actress who predeceased him by four years.

His third appearance was in the early Sixties, at the Theatre Royal, Drury Lane, in Wendy Toye’s production of The Great Waltz, co- starring with the opera singer Sari Barabas.

From Los Angeles Fuchs did much work in American television and Hollywood movies. His films included The Story of Ruth (1960), The Frisco Kid (1979), in which he played a feature role with Gene Wilder, and Avalon (1990), again a prominent role, with JoanPlowright. He also performed in one-man shows and stock company productions of Fiddler on the Roof, as Tevye, and Oliver!, as Fagin.