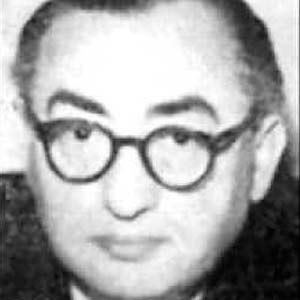 A writer, poet and teacher of Yiddish literature, Shpigl grew up in Łódź where he received a traditional education, going on to study in a public school.  Later he taught Yiddish and Yiddish literature at the Bund’s Yiddish schools, remaining in the Łódź ghetto throughout its existence.  From 1940 until the ghetto’s liquidation in August 1944, Shpigl was employed in various departments of the Judenrat (Jewish Council).  In August 1944 he was deported to Auschwitz and spent the rest of the war in a number of different labour camps.

Shpigl’s first Yiddish poems were published in 1922, and in 1930 his first book of poetry appeared in print, Mitn Punim tsu der Zun (Facing the Sun).  His second book of poems was ready for publication on the eve of World War Two. That, as well as a collection of stories about the Jewish weavers in the slum quarter where he had grown up, and Yiddish translations of a variety of other works, were subsequently lost.

Shpigl was one of the most prolific and important writers in the ghetto and composed many short stories and poems during his time there.  One of two poems set to music by Dovid Beyglman and performed in the ghetto theatre – ‘Makh tsu di eygelekh’ (Close your eyes) – was performed in the presence of Khayim Rumkowski, the Judenrat chairman.  It proved too shocking for Rumkowski, who promptly ordered that Shpigl be driven out of the ghetto lest the inmates become too demoralised.

When the ghetto was liquidated in August 1944, Shpigl hid some of his writings in a cellar and took the rest with him to Auschwitz. Astonishingly, after the Liberation he returned to Łódź, and found the manuscripts of sixteen of the stories he had hidden there.  He reconstructed the rest from memory and published them alongside others he had composed during the war.

Shpigl’s ghetto writings reflect his most acute concerns: the lack of contact with the world outside and the absence of an armed resistance movement in the ghetto.  His stories deal with the inner life of ghetto inmates as well as the relationships between them, and he describes their hunger and suffering very vividly.

Shpigl returned to Łódź after his liberation, living there from 1945 to 1948. He then moved to Warsaw and lived there until 1950.  From 1950 until his death he lived in Israel, all the while continuing to write in Yiddish.