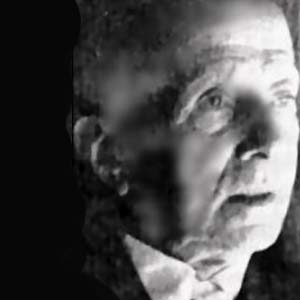 Kon was born in Łódź to a Chassidic family, and sent at the age of 12 to his grandfather in Kutno, where he studied Torah but also studied with local klezmers, absorbing folk music from players and badkhonim. When his family realized he would never be a rabbi, they sent him to music school in Berlin.

In 1912 he returned to Poland where he was drawn into literary artistic circles of Jewish Warsaw, particularly the “artistic culture salon” of the famous Polish actress Tea Artsishevska (née Miryam Isroels), later a member of the revi-teater Azazel. Her then husband, sculptor Bernard Kratko, introduced Kon to Isaac Leib Peretz and Kon set several of Peretz’s works to music, including Treyst mayn folk (Comfort My People) and the play Bay nakht oyfn alten mark (A Night in the Old Marketplace).

In 1922 “proletarian Lodz was tired of earnest dramas and light comedies.” Responding to the new popularity of satire, Kon – with poet Moishe Broderzon and painter Yitschok Broyner – created the marionette theater Chad-Gadya, the first of a string of revi-teaters (venues for music theater revues) in Polish towns and cities.

Henekh Kon was Moyshe Broderson’s closest collaborator, building with him all the kleynkunst theaters in Poland: the marionette-theater Khad-Gadye (1922) in Lodz, the kleynkunst theater Azazel (1925) in Warsaw, Sambatiyon (1926) and Ararat (1927). His was the musical spirit behind all of them.

His opera David and Batsheba was written (with Moishe Broderzon) and presented in Warsaw in 1924. Kon himself sang in the production, as did Moshe Shneur’s chorus.

He is strongly associated with the Warsaw Yung-teater, the Yiddish avant-garde theater company which emerged from Michal Weichert’s Yiddish Theater Studio. He wrote the music for Boston, about Sacco and Vanzetti, Trupe Tanentzap, an Abraham Goldfaden spectacle, Napoleon’s Treasure, based on a Sholem Aleichem story, and many others.

After the Second World War Henoch Kon worked with the Yiddish Art Theater in Paris. Beginning in 1934 he also worked in film; he composed the music for The Dibbuk and Zygmunt Turkow’s Di freylekhe kabtsonim (The Jolly Paupers), among others. He moved to America, where he was never particularly successful, and died in New York City.