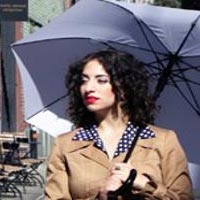 Ms. Klein most recently was seen in her debut in recital with City opera’s Robert Abelson and Claire Barry of the famous Barry Sisters with National Yiddish Folksbine and as Dodo in West Bay Opera’s The Merry Widow in May. In December, audiences enjoyed performance of the role of Rivka Shmuel in the National tour of Meshuga Nutcracker with the National Jewish Theater Festival. This summer Heather was seen singing at the final cabaret performance for the Medem’s Yiddish festival in Paris, France.

Heather has attended many summer programs, including Sherril Milnes’ program in Florida, and the selective Bel Canto institute in New Paltz, New York, with coaches from the Metropolitan Opera. Heather is also an up and coming performer in the Bay Area’s Yiddish song scene where she has performed with many festivals including: The Jewish Music Festival in Berkeley, Bible by the Bay, several old age homes throughout the bay area, Café by the Bay recital, San Francisco JCC solo recital, soloist with The Red Hot Chachkas at KlezKalifornia, soloist with Jewish Folk Chorus, Holocaust survivor Passover brunch and Hadassah Donor luncheon solo recital.

Upcoming performances include: Chanukah at S.F. JCC- solo recital, Messiah by G.F. Handel – soprano soloist with B.A.C.H. and “Mayn Yiddishe Velt” concert at Congregation Beth Am in May 2008. Heather Klein received her Masters degree at the San Francisco Conservatory of Music. Ms. Klein has been seen in many productions at the Conservatory in roles such as: Gretel and Dew Fairy in Hansel and Gretel, Cis in Albert Herring, and Luisa in The Fantastiks. Ms. Klein is very excited about the creation of her first cd, which is a compilation of theater music from the late 1800’s and early 1900’s that was brought to the lower east side of New York by immigrants and also new music written at that time for the theater and concert hall including art song, folk, opera, and beyond.