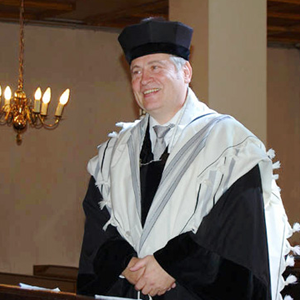 Born on April 25th 1952 in Strasbourg, he is the last pupil, before it closes definitely, of the Hazan’s School in Paris, but he is also, and most of all, the pupil of Monsieur Bertrand Joseph, who was cantor in Strasbourg.

In 1969, at the age of 17, he replaces cantors in Ingwiller, Sélestat, Troyes, Metz and Thionville.At the age of 21, in September 1973, he is appointed in Haguenau. He walks away seven years later, to enter Mulhouse’s synagogue, in 1980. He will work there for 12 years, recording cassettes and CD’s in order to keep and preserve the liturgy from Alsace. He receives in December 1991 the Honor Medal of Music Societies and Choirs, given by the French minister of Culture and Communication, in recognition of his work achieved in the field of liturgy and for the choirs he created.Michel Heymann taught students for the communities of East of France. He is one of the last keepers of the ashkenazi liturgy from the Rhine valley, especially in Alsace-Lorraine region.In 2001, he is appointed President of the Association of Cantors of Alsace and Lorraine.Since August 1992, Michel Heymann is the cantor of the Jewish community of Luxembourg. He created a new choir that accompanies him sometimes during Shabbat and religious ceremonies. He is often requested in France and in the rest of the world to participate to official ceremonies or concerts.Michel Heymann sang with the greatest hazanim, among them Estrongo Nachama ז”ל (Berlin) Moché Stern (USA) Adolphe Attia (Paris) Benjamin Muller (Anvers) Benzion Miller (USA) Raphaël Cohen (Paris) and choirs from the Great Synagogue of Strasbourg, the Ensemble Vocal Hébraïca, the synagogue de la Victoire in Paris and with the choir of hazanim of Jerusalem.