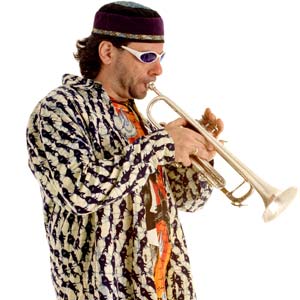 Frank London is a New York City-based a Grammy award winning, trumpeter, bandleader, and composer active in klezmer and world music. He also plays various other wind instruments and keyboards, and occasionally sings backup vocals. With The Klezmatics, he won a Grammy award in Contemporary World Music for “Wonder Wheel (lyrics by Woody Guthrie)”. He was knighted in 2016, receiving the Hungarian Order of Merit Knight’s Cross for his far-reaching influence on the Klezmer music as well as his significant contributions to the preservation of Hungarian-Jewish music and culture.

London received a B.A. in Afro-American music from the New England Conservatory in 1980. He is on the music faculty of SUNY Purchase.

London is best known for his role as trumpeter in the New York City-based klezmer band The Klezmatics. He is also a member of Hasidic New Wave and leads Frank London’s Klezmer Brass Allstars. He was a co-founder of both Les Misérables Brass Band and the Klezmer Conservatory Band.

He served as conductor and music director for David Byrne and Robert Wilson’s The Knee Plays, and has collaborated with the Palestinian American violinist Simon Shaheen.

London has composed numerous works for theater, dance, and film, and is the recipient of several Meet the Composer grants. Some of his major works include the folk opera A Night in the Old Marketplace (based on Y. L. Peretz’s Bay nakht oyfn altn mark); Davenen, a dance for the Pilobolus Dance Theatre and the Klezmatics; Great Small Works’ The Memoirs of Gluckel of Hameln, and Min Tanaka’s Romance. In 2011, A Night in the Old Marketplace was workshopped and premiered at MassMOCA.

He has also composed music for films, including John Sayles’ The Brother from Another Planet (1984) and Men With Guns (1997), Yvonne Rainer’s Murder and Murder, the Czech-American Marionette Theater’s Golem, and Tamar Rogoff’s Ivye Project.

He has been featured on HBO’s Sex and the City soundtrack, at the North Sea Jazz Festival, and at the Lincoln Center Summer Festival. He attends various workshops throughout the year, including KlezKanada of Montreal, where he teaches aspiring musicians the art of klezmer music. He has taught Jewish music in Canada, Crimea, and the Catskills and is Artistic Director of KlezFest London in London, England.

Yiddish theatre actress Jenny Romaine has the following to say about London:

“He [Frank London] has a relationship to the avant garde, to jazz, to ethnic music and he’s participating in a late 20th century investigation of Jewish music that I think has a knowledge of all the different aspects of our situation as Jews.”