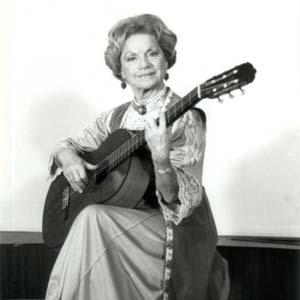 Flory Jagoda was born in Sarajevo, Bosnia, a member of the Sephardic Jewish community. When the Sephardic Jews were forced into exile from Spain and Portugal in the 15th century, many settled in other Mediterranean countries but preserved their native language, called Judeo-Spanish. Through her grandmother, Jagoda learned songs that had been passed down in her family for generations. She also became familiar with the region’s Balkan cultural traditions.

Jagoda escaped the destruction of Sarajevo’s Jewish community and came to the United States after World War II. She has been recognized as an important carrier of a unique musical heritage and also as a composer and arranger of new Sephardic songs. In addition to passing that tradition on to her children, she has taught many students who now perform Sephardic music in Judeo-Spanish. Today, she tours widely and her music is circulated through recordings and in The Flory Jagoda Songbook.

She is well known in the Washington, D.C. area for her willingness to perform at religious ceremonies, family celebrations and cultural events. Her performances are marked by musical beauty but also by her commitment to find meaning through affirmation of community in her personal experience.