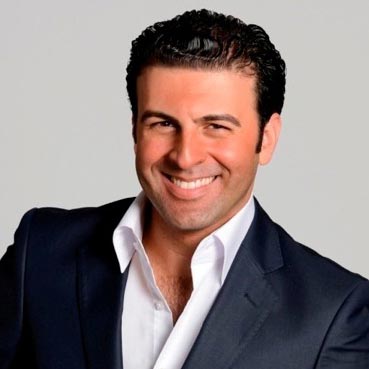 French actor and baritone, David Serero, has received international recognition and critical acclaim from all over the world. At only 34 years old, this fresh performer has already performed more than 800 concerts and performances throughout the world. Some of these have been broadcast on worldwide televisions totalizing an average audience of 30 millions of viewers and 18 millions on radios. Performing on the most prestigious worldwide stages and for the most important occasions, this true Show-Man and Entertainer brings a fresh approach to the Opera world by giving more than 80 concerts per year, during which he brings all his eclectic repertoire (Opera, Broadway, World Music, Jazz and Comedy), resulting as unique shows. He has given concerts at the Opera Garnier Paris, L’Olympia, The Eiffel Tower..the Tchaikovsky Hall in Moscow, the Budapest Opera conducted by Placido Domingo, concert at the Concertgebouw of Amsterdam…and made his sold out WEST END debuts at the Dominion Theatre. In London, David performed at the Wembley stadium and at the Royal College of Music. He has sung more than 20 lead roles in Opera, Operetta and Musical Theater. He organizes several concerts in benefit to charities for which he commits himself on a daily basis and performed for Presidents and biggest world’s leaders. He often goes to perform in Hospitals, schools?etc. In march 2012 David Serero performed his signature role of Don Quixote from MAN OF LA MANCHA in Paris. During november 2012 in Paris, David Serero performed the title role from the revival of Duke ELLINGTON’s only musical: BEGGAR’S HOLIDAY and also starred in the cast album recording. In January 2013, David performed with JERMAINE JACKSON in YOU ARE NOT ALONE, a musical written, directed and produced by David Serero. David has produced and directed I WISH YOU LOVE an album of Jazz standards with Jermaine Jackson. On this album, David and Jermaine have recorded a unique version of French classic “Autumn Leaves – Les Feuilles Mortes”.The video clip of their duet, directed by David Serero, was shot in Paris.

In December 2013, David shared the cover of “Theatre & Performances” with BARBRA STREISAND in London and made his BROADWAY solo debut at the SNAPPLE Theatre in New York. That same year he released his first studio album ALL I CARE ABOUT IS LOVE.

As an Actor he starred in Features Films, TV Films & Series and Plays. He recently performed in New York the lead roles in films The Kingdom of the Alley, Ring Ring, Super Paradise, Capicola, Laundry Day, Ransom, There will come soft rains and more. See IMDb.

In 2014, he released THE BROADWAY BARITONE featuring Broadway classics with a Philharmonic orchestra and toured in the UK with a performance on WEST END.

From May to October 2014, he gave more than 100 performances his One Man Musical Show in Paris at the Theatre du Gymnase.

During the summer 2014, he recorded the entire love letters’s correspondence of NAPOLEON to Josephine and released his new studio album THE CROONER BARITONE, The Frank Sinatra Classics for the 100th anniversary of Sinatra. Albums available on iTunes and music stores.

From October 2014 to April 2015, he has been playing the part of Chef Bruno in the musical TRUFFLES in New York. He played Christopher Sly & Vincentio from The Taming of the Shrew at the New York Public Library.

David performed the lead role of SHYLOCK from THE MERCHANT OF VENICE by William Shakespeare in New York with critical acclaim and King Edward (Richard III) in New York.

He also played the lead role of MARCEL PROUST from the play “Proust & Joyce at the Majestic Hotel” in New York.

He releases SEPHARDI (Sépharade) an album of Sephardic music in Ladino language and a duet with beatboxer MYTHE BOX on a 100% Vocal version of HABANERA from Carmen opera.

In November 2015, he releases ALL MY LOVE IS FOR YOU, a Pop Rock album, entirely composed, performed, arranged and produced by himself.