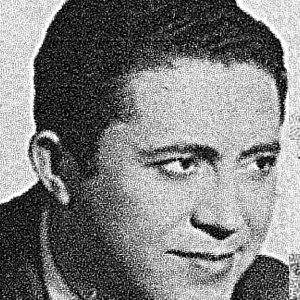 Ben Bonus, an actor, producer and a prominent figure in the American Yiddish Theater.

Born on 9 November 1920 in Horodenka, Eastern Galicia. His father was a baker, who then became a fruit merchant. He learned in cheders until the of age twelve in the TSISHO [ed.– acronym of Central Yiddish School Organization – secular schools], where he also used to perform in children’s productions, then he learned in the local Polish gymnasium. At the age of fourteen he participated with the young group of the Sholem Aleichem Dramatic Association under the direction of David Herman, in Dr. Tsipur’s “Oyfshtand” (in the role of “Porits [noble man]”). He learned to sing with a private music teacher. He “wandered off” with a friend to Lemberg, where he tried to “crack his expenses” by singing in the courtyards, [then] began to tour with Shtshogol’s troupe until he returned back home, again participating in the drama group, and after completing the gymnasium in 1929 he was brought by his mother to America so he could settle into his studies. But here he soon took to the estrada (highway), and in a year’s time [he] participated in small arts with a collective of the “Goldfaden Theatre” for the International Workers Order, performing in concerts, participating with folksongs on the Yiddish radio with Arnold Jaffe, and he took drama courses for a year with Benjamin Zemach.

In 1942 he toured with the Ben Ami troupe and acted in the Hirshbein, Ibsen and Henri Bernstein repertoire in Detroit (mgr.

A. Littman), then for nine months performed with the “Folksbiene” in Los Angeles, California, with a repertoire of Yiddish folksongs and small arts, and also at the same time performed in concerts for the Jewish Labor Committee and for the Histadrut.

Returning to New York, B. was engaged for the “Hopkinson” Theatre (manager Oscar Green), where he performed as the “blind soldier” in Freiman’s “Hard to be Honest”, and then he was invited by Israel Rosenberg into his vaudeville theatre on Clinton Street, which he entered into with success, staging Yiddish folk songs in repertoire for Yiddish vaudeville.

B. then became engaged to act in legitimate theatre in Chicago (manager A. Ostroff), and between seasons he directed there the Israel revue “Shalom, Tel Aviv”, with Mina Bern and the Israeli actor Matityahu Rosen.

In 1945 he performed in New York for Maurice Schwartz in the role of “Nisn alter” during a star production of Hirshbein’s “The Blacksmith’s Daughters.”

In 1949 B. became a member in the Yiddish Actors Union, and in 1952 he became, together with Henrietta Jacobson and Abraham Littman, manager of New York’s National Yiddish Vaudeville Theatre.

For the last seven years, B. is the manager and participates in the tours across the United States and Canada of the “Farband” troupe, and in the summers he is program director and fellow participator in the programs in the Farband’s “Unzer Camp.”

B. has also participated as “Rubele” in the production of Fishl Bimko’s “Father and Son” [“Dembes”] in the “Labor” Temple in October 1956.

Mr. Bonus was regarded as a theatrical figure who always sought to present programs that would reflect the culture and traditions of Yiddish life and theater. He brought several Yiddish plays to Broadway, all of which were generally warmly received by critics. The first was ”Let’s Sing Yiddish,” a revue in which he was a star, producer, collaborator and, with his wife, co-director.

”It showed, among other things, that Yiddish theater need not rely upon the kindness bestowed upon a terminal case,” said Richard F. Shepard of The New York Times. ”It stood on its own feet, even in a language that is used nowhere on Broadway except backstage.”

But being on Broadway just to be there was not Mr. Bonus’s objective. Mrs. Bonus said her husband spent practically his entire life in the Yiddish Theater because of his ”love for it and also knowing that six million Jewish people were killed in the Nazi era, including his parents and his family, and he felt he should keep up the songs, the classics, the poetry, the music.”

She said Mr. Bonus took his company of actors all over the United States and Latin America, ”to where people didn’t hear Yiddish so much.” He felt, she continued, that the language and the culture should not be forgotten. ”He had sort of a mission inside him,” she said.

In 1964, pursuing his mission, Mr. Bonus opened the Village Theater on Second Avenue at East Sixth Street. In the course of the season’s 31 consecutive weekends, 250,000 people came to the theater to see a varied program that included films and music. The next season, more than 300,000 persons went to the theater on 40 weekends.

He and his wife kept their facet of Yiddish Theater alive by making the company’s wardrobes, selling tickets, designing scenery and running their production company out of a former closet in the Workmen’s Circle building at 45 East 33d Street. The Circle, a Jewish cultural and fraternal organization, subsidizes the Folksbiene Theater, a Yiddish theater company founded here in 1915, one of the three Yiddish theater companies in New York. Mr. Bonus founded a Hollywood Folksbiene branch in 1943.

Acted in and Produced Plays

He founded his own theater group here in 1946, the ”Yiddish Mobile Theater.” Later he organized the Farband Players and they toured the United States and Latin America. In 1966, he established the Yiddish theater in the Borough Park Theater, at East 51st Street at New Utrecht Avenue, Brooklyn.

He and his wife appeared here last November in ”Let There Be Joy” at the Norman Thomas Theater, at 111 East 33d Street.

Mr. Bonus was brought to the United States in 1939 by an aunt who went to Poland and brought him back as a student.