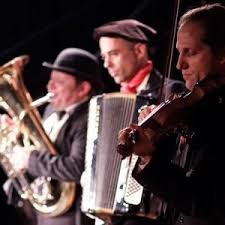 Longing for the days when music meant something lush and acoustic? Missing the virtuous ornamentation and evocative melodies? Love that good ol' mama loschen? If traditional Eastern European music holds a special place in your heart (or if you want it to), the debut performance of Trio Carpion this Thursday in Jerusalem offers a chance to hear rare Yiddish, Romanian and Greek songs performed by outstanding musicians. The newly formed ensemble's sparse instrumentation - accordion, vocals, violin and euphonium (a slightly smaller tuba used for marching bands) - allows for great expression, and the three members are all young masters with extensive experience.

Gershon Waiserfirer is one of the hottest musicians on the Israeli ethnic music scene, and a master of the oud (lute) as well as the euphonium and other horns. Violinist Daniel Hoffman, an international leader in Yiddish fiddling, is best known as the leader of Davka, an influential ensemble which mixes klezmer, Western classical, Middle Eastern music and jazz. Avishay Fisz, besides being a virtuoso accordionist, is also an accomplished vocalist/actor, and brings a unique theatrical element to the proceedings.

Most klezmer bands play a modern, Americanized style heavily influenced by the immigrant experience in New York, but the core of Trio Carpion's repertoire is 19th-century European Ashkenazi music and folk songs - an incredibly rich strata rarely heard nowadays. Consisting of suites of melodies played for weddings and other life cycle events, this emotionally stirring music is also quite distinct (but related to) other Ashkenazi genres such as Hassidic nigunim or songs from the once flourishing Yiddish theater. The trio, whose name was inspired by the talking carp of Jewish folktales, also draws heavily from Romanian music and its Gypsy-influenced romanticism, and Greek rembetiko, the earthy music of the Greek lower class which had its heyday in the 1930s and '40s. The group doesn't mix genres, but rather presents the material as refined traditionalists who have delved deep into the intricacies of folk music. Trio Carpion is decidedly old-school; it is doubtful that any of the repertoire was written after World War II, and most was composed a good deal earlier, several generations earlier in many cases. It takes a brave ensemble to champion such music in contemporary Israel, where Yiddish is unfamiliar to most and studio-produced pop rules.

But there are still those who are nostalgic for the sound of old Europe, and for them, as well as anyone else interested in the roots of Jewish music, Trio Carpion can be a breath of fresh air in an otherwise lifeless room.

Avishai Fisz, Vocals and accordion, is a multi-talented performer, musician, composer, and linguist active in the Eastern European as well as modern and avant-garde musical scenes in Israel and worldwide. As an actor, he performed with Habima, Israel's national theater for ten years. Avishai taught Yiddish at the Trier University, Germany, as well as composer and musical director at the Trier municipal Theatre. He was guest lecturer on Yiddish folk music at the universities of Hamburg and Vilnius and in Sholem Aleikhem House in Tel-Aviv. He has performed extensively, including solo recitals of Jewish folksongs in Israel and Europe, and is currently accordionist of the Israeli ethno-jazz band Tizmoret. He has recorded and performed various chanson and song solo programs thoughout Europe, and released a commercial cd with Das Klezmer Orkester, Germany (2001).

Recent projects include “Di Bloye Kats” (The Blue Cat) – a cabaret extravaganza of Yiddish light songs of the 20’s-30’s, with singer Ruth Levin. He performs “Poylisher Harbst” (Polish Autumn) – a grotesque song cycle after texts of Yisroel Rabon (1898 Lodz - 1941 Ponar), composed by Tamar Gafni-Yeshurun. He is also the stage composer of the critically acclaimed Jerusalem Theatre Company's premier of Shulem.

Gershon Waiserfirer, baritone, strings, was born in 1972 in Tajikistan and emigrated with his family to Israel in 1980. His passion for music emerged at the age of 11, when he started playing the piano, the baritone horn, and later the trombone at the Conservatory in Tel-Aviv. After traditional studies at the Tel-Aviv Concervatory, the Center of Eastern Music and Dance in Jerusalem, and the Rimon School of Jazz and Contemporary Music, he continued his musical development mostly by studying on his own. He also studied acting at Beit Tsvi, one of the leading theater schools in Israel. Together with theater studies, he began exploring various string instruments, including the guitar, the oud, and the jumbush. He is currently one of the most sought-after oud players in Israel. Owing to his virtuoso playing on a variety of instruments, he is a regular member of a large number of successful musical groups in Israel. Waiserfirer has participated in many festivals in Israel as well as in New York, San-Francisco, Los Angeles, Rochester, Chicago, Boulder, Berlin, Barcelona, Madrid, and the Netherlands.

Daniel Hoffman, violin, a descendant of a long line of Bessarabian furriers, was born and raised near Los Angeles and moved to Israel in June of 2005. After graduating from the Manhattan School of Music in New York, he quickly began un-learning most of what he'd been taught and turned his attentions to Eastern European Jewish music and formed several klezmer bands in San Francisco. In 1992, he co-founded Davka, combining Ashkenazi music with jazz and Middle-Eastern rhythms. Davka has released five CDs of original music, including four on the Tzadik label. He also founded the Klez-X (formerly the SF Klezmer Experience) and has developed a reputation as one of the foremost experts of the Yiddish violin style, recording and performing with the top players in the field. Hoffman has received numerous composition grants, including from Meet The Composer and the NEA. He has written two new scores for the silent films “The Golem” and “Jewish Luck”. He is currently composing music for “David in Shadow and Light,” a new musical (with librettist Yehuda Hyman) based on the King David story. The musical will premiere at Theatre J in Washington DC in May of 2008. In Israel he performs with J.C. Jones and Nory Jacoby in Between The Strings, a free music string trio,in the Greek rembetico group Perach Adom, and is currently performing in the new Jerusalem Theater Company comedy “Are You Happy Yet?” His latest releases are Davka Live and a remix of the Klez-X Harbst disc, KLZXRMX.