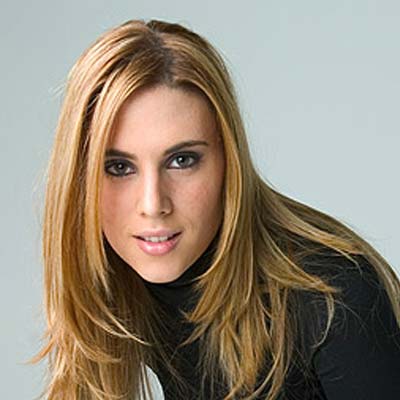 I was born in November 19th 1986, in Buenos Aires, Argentina, and I am sure that since that day my path was marked…
I guess I was discovered when, in my house I was asked to “turn that radio down” to which I answered that it was not the radio but me singing a song with a microphone that had come with the sound they’d bought.

Since that moment I’ve sung at every family or friends reunion. But no matter how much I complained, it helped me face the toughest audience, as it is family, and grow up between applausesand critics.

My primary school was “Instituto Alberto Einstein“, and there was where I met who then would turn out to be my first singing couch, which gave music lessons at this school.

I went to Escuela Técnica ORT high school, in which I completed the orientated career of Musical Production. With them I traveled to New York for a worldwide ORT encounter, where we presented a tango show.

During my career I was lucky and privileged to have met and worked with many people. Amongst them I could name the song writer Graciela Carballo, with whom I worked for a very long time and who became a great friend, but most of all somebody which I’ve learned a lot from.

I also had the pleasure to have met and worked with the song writer Horacio Lanzi, of who I have the best memories.
I was invited by the City Government of Buenos Aires in the year 2003 to sing at the Cervantes Theatre a song (whose lyrics were written by Graciela Carballo) called “Aunque haya desamor (Yo Creo) (whether there is dis-love -I believe)”. At this event in commemoration of the Flag’s Day (June 20th) different students made altogether an enormous flag and displayed it on stage while the song was being performed, this performance was really touching.

I also had the honor to sing at Bergara Leuman’s “La Botica del Ángel”, at the “Café Homero Manzi”, at the Feria del Libro (book fest), Gala dinner of the Dominican festival in Nueva York, at the First Encounter of Klezmer Music in Argentina (EMMKA 2008), among others.

I’ve taken singing lessons with Liana Lecuona for several year now (since 2002) , a professor that has taught me more than anybody, and whom spare no wisdom or love. I still have a lot more to learn from her, not only as a singer, but also as a person, a professor, and a friend.

Not long ago, thanks to the inspiration of some of the people I worked with, and the inspiration of the Light, I started writing my own songs (which you can access by clicking the music “link”), where I try to share my experiences, my feelings, and perhaps my wishes.

I've participated on the Argentinian show "Soñando por Cantar" from the producer company "Ideas del Sur", aired on Channel 13 (Capital Federal , Argentina), in which I was one of the finalists. This was a beautiful experience where I have received lots of compliments from the judges that were Patricia Sosa, Alejandro Lerner, Oscar Mediavilla y Valeria Lynch.

I've worked with many producers, arrangers and muscicians, on independet productions of my own music as well as international renown composers.

In this biography I cannot forget the most important part of my career… my mom: who had to put up with me through years of artistics breakdowns, “I wanna be a singer…mmm,…. Better not, YES YES it’s been decided … but I’m afraid … what do I do?!!!”. Really the most patient and saint, without her I wouldn´t be writing, in my own web site, my story for everyone to know it and so may be some day I won‘t have to tell it anymore.