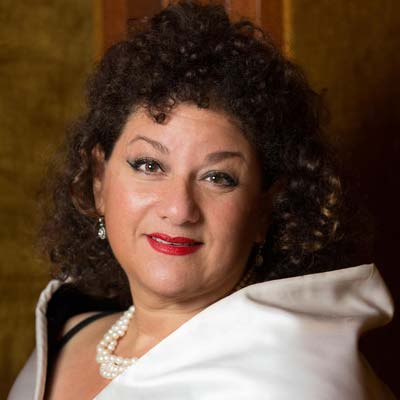 Bill Schuman, the noted "Vocal Guardian" of such great singers as Aprile Millo and Marcello Giordani, has taken Ms. Azrieli under his wing, and over the past year, she has added the great Verdi heroines to her repertoire. Hailed as the next true Verdiana, Ms. Azrieli is ready to portray Aida, Leonora (La Forza del Destino), Amelia (Ballo) and Leonora (Il Trovatore). She has also prepared Madama Butterfly, Tosca, andManon Lescaut.

Ms. Azrieli’s recently portrayed Liù in Puccini's Turandot with the New Israel Opera. She also sang the 2nd Soprano Soloist in the MahlerEighth Symphony with the National Orchestra of Canada, and is in popular demand for many varied concerts across Canada, in New York City, and in Israel.

With the Canadian Opera Company, Ms. Azrieli portrayed Juliette (Romeo and Juliette) and Mimì (La Bohème). Other roles include Susanna (Le Nozze di Figaro) with the Sarasota Opera, and Adriana Lecouvreur (cover) for L'Opera de Paris a la Bastille, and Elvira (Don Giovanni) with the Vermont Opera Festival. She received glowing praise for her portayal of Rachel in (La Juive by Halevy), Laurette (Dr. Miracle) with L’Opéra Français de New York, and Nedda (I Pagliacci) with the New York Opera Theatre.

Sharon Azrieli has performed many varied works of Sacred Music. Her favourite is the Verdi Requiem, which she sang recently with the New West Symphony in Los Angeles. She sang the Soprano Solo in the Stabat Mater of Dvorak under the direction of Jean Francois Rivest with the University of Montreal Orchestra and Chorus, the Mass in C Minor by Beethoven, as well as Rossini’s Stabat Mater. Ms. Azrieli has concertized extensively around the world, bringing to life opera arias and a large collection of songs by Tchaikovsky and Rachmaninov. Her concerts with major symphonies include the Jerusalem Symphony, the Tokyo Symphony Orchestra, the Haifa Symphony, the Israel Cameri Orchestra and the McGill Chamber Orchestra.

A native Montrealer, Ms. Azrieli is a graduate of Vassar College, the Juilliard School, and l'Universite de Montreal. She speaks many languages. Her many awards and prizes include: First Prize: the Canadian Women’s Club Competition, Concert Finalist in the Luciano Pavarotti International Vocal Competition, District Winner of the Metropolitan Opera Auditions and recipient of a Metropolitan Opera study grant.