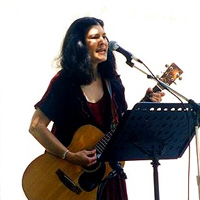 Rebecca Wave has been writing and performing for more than 27 years. From singing folk songs on the front porch while her father played an old guitar, she progressed to years of piano and cello lessons, stage and choral singing and playing recorder on the roof.

She found herself with guitar in hand at 23, singing songs that percolated up from the flood plains and tidepools of her life.

After a long period of traveling the country with various cats, dogs and people, and working a stunning variety of day jobs, Rebecca has stayed in Santa Barbara long enough to raise four children and record five albums.

Her style has been influenced by (almost) every genre: classical, pop, jazz, rock, folk, alternative, gospel, yiddish, blues, r&b, world music, techno... What has emerged is a direct, passionate voice with a lot to say about grief, joy, confusion, clarity, love and lust.

Melodies as simple as a childhood dream or complex as an extended jazz riff deliver lyrics that cut to the heart.