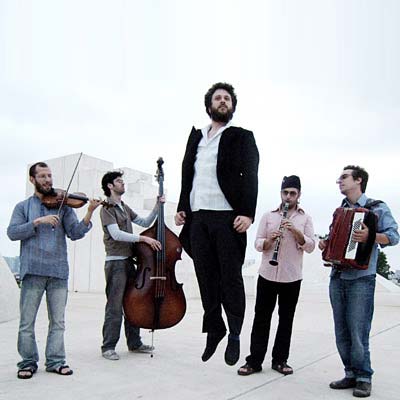 OY DIVISION presents the Renaissance of the Shtetel with good old-fashioned Eastern European Jewish music that will make your grandma dance. The OY DIVISION hysteria started in Tel-Aviv when some of Israel's top talents united to satisfy their lust for Eastern European Jewish tunes. Their shows consist of spontaneous dancing in the audience and enthusiastic cries of joy or OY !!

The band members are all top musicians. Eyal Talmudi (clarinet and vocals) - reed player for the Balkan Beat Box. Noam Inbar (vocals, accordion and drum) - The leader of the acclaimed punk-folk band Ha'biluyim. Avichai Tuchman (double bass) of My Second Surprise. Gershon Leizersohn (violin and vocals) is a prominent musician in the religious music circles. Assaf Talmudi (accordion) is one of Israel's busiest record producers.

OY DIVISION don't aspire to create modern Klezmer nor do they try to make it contemporary, they recreate and bring back to life the nearly extinct pre-world war II Jewish music the way it was originally performed. OY DIVISION play a mix of instrumentals, Wedding dancing music, folk songs and pathetic theatrical pieces all with the zeal and exuberance of punks! The authenticity of the music was obtained by careful listening to Klezmer recordings from the early 20th century. The band explain their attraction to the genre as a form of relating to their roots as well as a protest against modern Israeli culture.