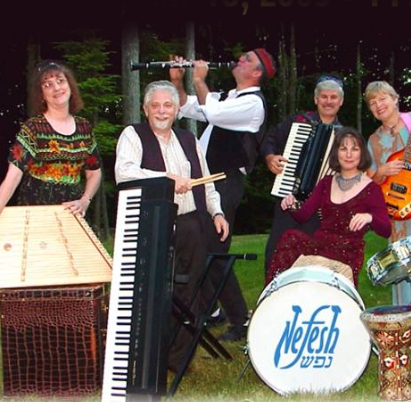 Nefesh Klezmer Band. Comprised of six talented performers with a variety of musical backgrounds, including rock, folk, chorales and classical orchestras, the band is dedicated to the preservation of a rich Jewish musical heritage.

Nefesh presents innovative and fresh interpretations of traditional and contemporary Jewish music from around the world, as well as original compositions.

Nefesh has brought audiences to their feet at numerous events in and around Connecticut and New York including the New Haven International Arts & Ideas Festival, First Night Danbury, NoMAD International Music & Dance Festival, The Jewish International Music Festival, and Hartford? Hanukkah Mania. And have appeared twice at the prestigious Merryall Center for the Arts

Sharon Citrin - Vocals
Sharon Citrin is a cantorial student at Hebrew College in Boston and a soloist and educator at B'nai Israel in Southbury, Connecticut. She also directs the "Confronting Anti-Semitism" program for the Connecticut Anti-Defamation League.

Linda Goodman - Bass Guitar, and Vocals
Linda is a half of the popular local duo "Jam Sandwich" who perform original music for children. She has written and directed musicals for the Montessori school of Northwestern Connecticut. Linda is a former member of the "Aeolian Consort", an early music ensemble.

Barbara ( Britt ) Goodman - Piano, Hammered Dulcimer, and English concertina
With a classical piano background, Britt became interested in klezmer style after attending Klezkamp in the Catskills. She also plays Celtic music on hammered dulcimer and English concertina, and plays for contra-dances with the band "Step It Up!".

Alan Falk - Drums, Guitar, Mandolin
Alan is a singer and song writer who has performed with various rock and folk groups in the United States and in his native England. In addition to his music, Alan is a galleried fine artist using media from oils to electronic holographic imagery.