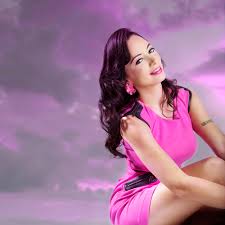 From a very young age dedicated her life to the music and performed with her sister Clara (actually actress and vocalist) in the most important festivals around the country, as well in radio and TV and together became one’s of the youngest and notable female duets in Paraguay.

Studied in prestigious conservatories from South America and Europe performed with symphonic and chamber orchestras, folk and ethnic ensembles from Paraguay, Brazil, Italy, Spain, Croatia and Israel singing classic and contemporary repertoire, most of them as a first audition.

Made many researches about Sephardic music as well about Latin American : Colonial and contemporary music and Ethnomusicology from the Guarani’s in Paraguay.

Playing Spanish guitar, castagnettes, cymbals and tambourine in Solo Performances and with folk or Latin groups.

During 1999-2000 realized an intensive musical activity in Israel where recorded 3 Cd’s and brings in all her concerts messages of peace without frontiers of races and discriminations.