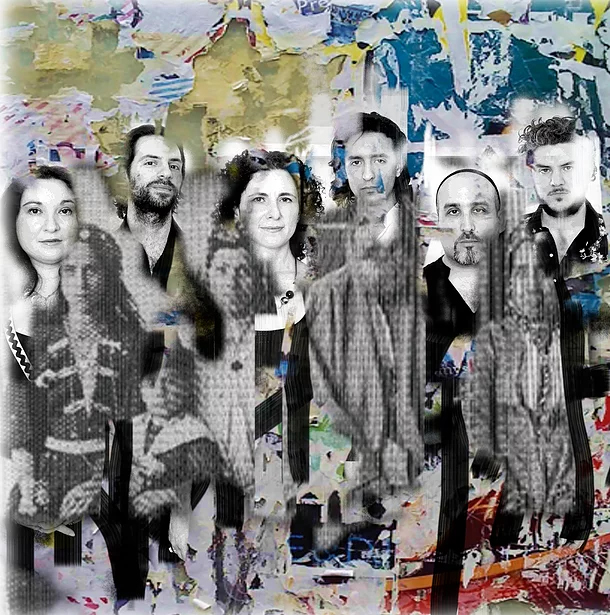 Los Desterrados – "The Exiles" – are a London sextet who on "Tu" have created their own radical, rousing and rootsy take on the ancient folk music of the Sephardic Jews.

Los Desterrados (The Exiles) was Founded in 2000 by guitarist and oud player Daniel Jonas, with the objective of exploring the largely overlooked Judeo-Spanish musical tradition and bringing ancient Ladino music back to life for modern audiences, demonstrating that Jewish music can be sensuous, passionate and exotic.

Initially Daniel invited Jean-Marc Barsam to play bass and saz, vocalist Hayley Blitz and guitarist Jake Baum to join the project. With the addition of percussionist Mark Greenfield, the Los Desterrados sound was beginning to emerge.

Following a successful debut at the Limmud conference, and a conversation with mutual friends, Los Desterrados enlisted Royal Academy graduate, Ariane Todes to bring her skills on the violin to the mix.

In 2001 the band recorded their first album, ‘Por Dos Levanim' and Jake Baum emigrated to Australia. The opening for a guitarist was filled by Drew Salida, whose funky flute and sultry voice added more dimension and depth to the sound.

Los Desterrados' second album, "Tu", was launched with sell-out gigs and much acclaim in 2004.

Los Desterrados are currently hard at work on a third album.

About the music:
Judeo-Spanish (Ladino) is the collective term for the languages spoken by the Jews of Spain. Following their expulsion in 1492 the original Spanish of the time became infused with other languages including Arabic, Turkish, Greek, Slavic languages, and also Portuguese, French and Italian.

Major communities were established in North Africa, Turkey and around Greece and the Balkans, each developing distinct dialects as well as religious customs. This geographical spread is reflected in the musical variety of Judeo-Spanish folk songs carried down to the present day.

Judeo-Spanish usage started to diminish with the rise of European nationalism at the end of the 19th Century. The Nazi destruction of the Jewish communities of Greece and the Balkans and subsequent emigration to Israel and the Americas accelerated the language’s decline. Today, there are estimated to be less than 200,000 speakers world-wide. In July 2002, UNESCO officially recognised Ladino and its variants (Dzhudezmo, Haketía, etc…) as one of the world’s endangered languages.

Los Desterrados have revived the music of these Jewish communities, infusing the ancient folk songs with contemporary rhythms and adding their own distinctive flavour for a modern audience, “We always start with the original lyrics and melody. Everything else is pretty much open for interpretation

As the Gipsy Kings reinvigorated flamenco and the Gotan Project revitalised tango so Los Desterrados have brought vibrant new life to the ancient music of the Sephardic Jews. Fusing Spanish Flamenco and the fiery Gypsy melodies of the Balkans and Greece with the rhythms of Morocco and Turkey, Los Desterrados have created a rootsy Mediterranean sound that is wholly their own. Featuring traditional instruments such as the cajón and "oud with vocals in Ladino, the language of the Sephardic Jews, or Hebrew, the unconventional arrangements and rousing rhythms Los Des wield are heavily influenced by the music they"ve all grown up on as native North Londoners - rock "n" roll, jazz, folk, flamenco, funk and soul.