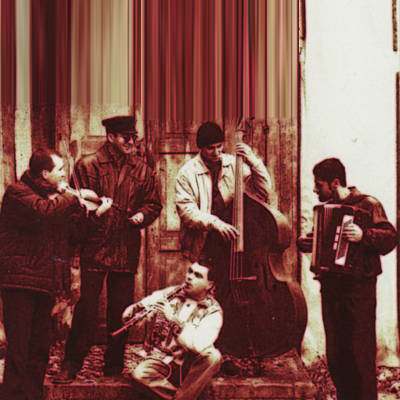 Long before the dark shadows of the 1930s, traditional Jewish celebratory music ‘klezmer’ was a thriving part of everyday life in Jewish communities across the Ukraine. Now those times are long gone, but the rebirth of Jewish communities in Central and Eastern Europe over the last ten years is creating a cultural impetus that is being felt far and wide across the whole region.

A video of a klezmer show altered Stanislav Raiko’s career. The Ukrainian born violinist and leader of the Kharkov Klezmer Band recalls: “I just saw this one single show and realized that this was my music and I wanted to play it”. He then began listening to old recordings of Eastern European Jewish folk music to help him master the genre. In the late 1990’s, Raiko, a classically trained musician, started his group

The Kharkov Klezmer Band is something new in the international klezmer revival. Like many of the superstar klezmer groups from the USA, they are a group of conservatory educated musicians with flawless technique. But it is the spirit of their music, the profound feeling of what this music means to them and the way they convey this to their audience that makes them truly special. Remember that to perform Jewish music was effectively forbidden in the Ukraine from the 1930s until 1991, and it becomes clearer that this album is more than just a musical statement, it’s the sound of people reconnecting with their heritage, proclaiming their identity after more than half of century of silence.

Their style of klezmer is raw and beautiful, Jewish music with a deep understanding of its own roots. Traditionally, the goal of the klezmer musician was to bring out both extremes of emotion that a wedding encapsulates: the joy of starting a new family and the sadness of leaving the childhood home. The Kharkov Band can genuinely be said to be one of the few bands on the international circuit who understand this concept of ‘laughter through tears’. Not for nothing have performances across Russia, the Ukraine, Estonia, Hungary, Spain, Austria and the UK fast given them a reputation as one of the most powerful and exciting live acts in Jewish music.