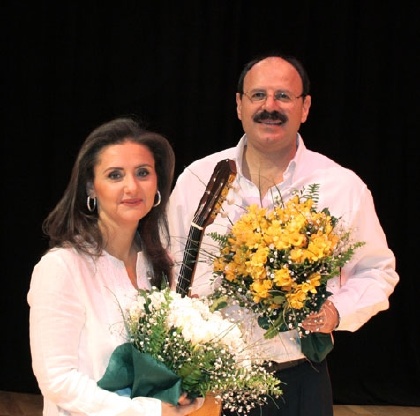 Janet and Jak Esim from Turkey-- the greatest performers and rediscoverers of Sephardic song in the world today-- present Judeo-Spanish songs from the treasury of romances, vocals and instrumentals of the community of exiles from Spain, who created new lives throughout the Ottoman Empire some 500 years ago.

Ballads and songs of longing, sadness and love reflect a rich musical culture. This is a culture filled with warm, rich melodies marked by the route taken by the exiles and the voices of the lands in which they found new homes, however their roots are planted deep in the Gold Age of their creation: Medieval Spain.
The songs are presented in the polyphonic style of their sources and in an authentic spirit, through the vocals and instrumentals of the members of the Ensemble for Jewish-Spanish Music, which includes some of the finest musicians of contemporary Turkey.

Jak Esim is one of the world's most important researchers and collectors of songs from this disappearing culture and language. The Ladino sound collection which was collected and recorded by Jak Esim in the Jewish Sephardic community of Istanbul during the years of 1960 - 2005 will be added to the National Sound Archives of The National Library of Israel in Jerusalem.