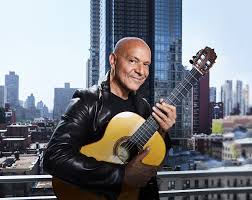 Gerard Edery (baritone/guitars/saz/composer/recording artist) was born in Casablanca and raised in Paris and New York City, speaking several languages throughout his childhood while absorbing a variety of musical traditions spanning three continents.

Trained as a classical baritone at The Manhattan School of Music, he has sung more than 30 roles with opera companies around the United States.

Mr. Edery is also a cantorial soloist for The Village Temple in New York City and is a frequent guest at Synagogues and Jewish Community Centers throughout the United States and Canada. Considered one of the leading interpreters of Sephardic Song, he has been honored with the Sephardic Musical Heritage Award and has received a Meet the Composer grant for his original songs.

His musical, Song of the Turtledove, co-written with Noa Ain, was presented by the Premieres Festival at Lincoln Center. Highlights of the coming season include The Indianapolis Early Music Festival with The Ivory Consort, Lincoln Center Out-of-Doors with The Gerard Edery Ensemble and Merkin Concert Hall (sponsored by The World Music Institute) with The Sons of Sepharad. Mr. Edery has been featured in major concert halls and festivals in the United States, Canada, Europe, the Far East, Israel, Morocco and Mexico. He has performed at the United Nations in New York City and the Palais des Nations in Geneva, The Smithsonian Institute, The Library of Congress, The Holocaust Museum, Seiji Ozawa Hall at Tanglewood, The Cervantino International Festival in Mexico, the International Festival of Sacred Music in Morocco, and at Lincoln Center, Alice Tully Hall, Merkin Concert Hall, The Jewish Museum and The Museum of Jewish Heritage in New York City, to name a few. Mr. Edery is a prolific recording artist and has released ten CDs on the Sefarad Records label.