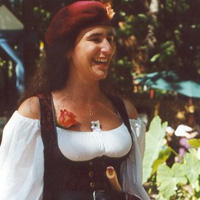 Eva started singing as a 5-year-old girl with her father in the living room. That is where she gained her love of folk music from all over the world. She followed up the singing with her father by becoming involved in musical theater where she honed her musical talent with training and practice. She was fortunate to be able to perform in such shows as Guys and Dolls, Oklahoma, Briar Patch, Joseph and His Amazing Technicolor Dreamcoat, and many others.

Most recently she has had the opportunity to delve into folk music from Eastern Europe. She has been learning to sing in Bulgarian, Albanian, and Yiddish in addition to the ever popular Celtic.

Eva started playing recorder in kindergarten when the teacher handed her one in music class. What better music is there to play on recorder than Celtic?