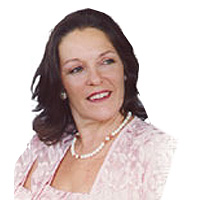 Argentinian soprano of relevant international career in the chamber song field and in works for soloist and orchestra, with a wide spectrum of languages and styles.

Mme. Alberti sang at Teatro Colón in Buenos Aires, at the Khan theater and the Rubin Academy in Jerusalem, at the Winston Churchil Auditorium in Haifa, the Théatre du Forum des Halles; at the Talman Dame Myra Hess Memorial Concerts in Chicago, the Hall of the Americas (O.A.S., Washington D.C.). at the French Institute in Naples, at the Institute of Hispanic Culture in Copenhagen at Bolivar's Hall in London and at the following festivals: Mare Musica in Ischia (Italy), Duisburg AKZENTE 1989 (Germany) and at the Second International Meeting of the Sephardic Song, in Madrid (Spain).

She made her presentation at Carnegie Hall with the Argentinian Ensemble of Contemporary Music, conducted by Gerardo Gandini and has afterwards premiered many works by contemporary composers, among them, Gerardo Gandini, Fernando González Casellas, Marta Lambertini, Jean Sibelius, Josef Tal and Mark Kopytman.

Mme. Alberti has been a soloist with the orchestras of Kol Israel; Sinfónica Nacional Juvenil of LRA Radio Nacional, Mayo Chamber Orchestra and Chamber Orchestra of La Plata, in Argentina. She has recorded for Radio France, Spanish Radio-Television and WDR in Germany.

In 1983, during a tour sponsored by the Argentinian Ministry of Foreign Affairs, she performed a cycle of Sephardic songs at the Dag Hammarskjold Auditorium of the U.N. It was the first program of Jewish music at the Hall.

She appears frequently in Brazil, at the main halls of São Paulo, Curitiba, Porto Alegre, Rio de Janeiro and Florianopolis.

During 1997 she presented Aires Mediterráneos (Mediterranean Airs), recital of Sephardic songs with instrumental accompanyment; Spanish, French and Italian songs for vocal soloist and piano and "Un pueblo y sus canciones" (A people and its chants) at the Coliseo Podestá Theatre in argentinian city of La Plata, at the University of Sao Paulo Theatre and at the Quintanilla Theatre in the city of Mendoza, Argentina. She is now presenting Amores Republicanos - Le Chant de Marianne (Women's songs during the French Revolution).

She has created, as soloist and co-author, the Suite de Antiguas Canciones Sefardíes (Suite of Old Sephardic Songs) -1983- by Jorge A. Pítari and the Suite of Sefarad -1996- by Javier Zentner, both for voice and string orchestra., commissioned and premiered by the Mayo Chamber Orchestra.

She is member of the Artists Society of France.

Mme. Alberti hold a doctoral degree in music, specializing in Musicology and is a Superior Professor of Music, graduated at the Argentinian Catholic University. Her research on Traditional Sephardic Music in Spain and Latin America has been awarded in Argentina and abroad.

She has recently been awarded with the Year 2000 Fellowship for Foreign Hispanists by the Ministry of Foreign Affairs of Spain.