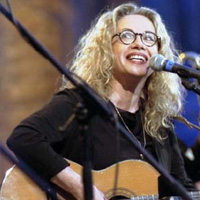 Calling someone her country's greatest singer would be a huge compliment to most performers. In the case of Chava Alberstein, however, it only tells a small part of the story.

But Chava Alberstein sees herself as much as a singer of the world as just a singer of her beloved Israel.

"Even though I have lived in Israel nearly my entire life, I am constantly questioning my place in the world," said Alberstein. "Maybe this searching comes from being an artist, maybe it comes from being a Jew. I'm not really sure."

This bittersweet tension between the national and the universal is most evident in all of her recordings. From tender love songs to defiant songs about peace and oppression. There are prayerful songs celebrating the beauty of the human form and more melancholy songs about loss, poverty, and solitude.

Alberstein has lately released “The Well” , an album of Yiddish poems she has transformed into folk songs, with the renowned klezmer group the Klezmatics.

“In Israel, you would be hard-pressed to find anyone today composing and singing in Yiddish," said Klezmatics lead singer Lorin Sklamberg. "Some people still see Yiddish as the language of soft Jews who can't protect themselves. But Chava understands the joy and depth of the language."

Yiddish was the mother-tongue of Alberstein's family in the small town in Szczecin, Poland, where Chava was born. Her family moved to Israel when Alberstein was only 4-years-old, but Chava says she has never totally lost the feeling of being a stranger.

"No matter where I am, even if it's in my own country, I feel like a bit of a guest," she said. "People can appreciate this today, because they move around so much. Every country you go to in the world is filled with so -called foreigners."

Since the very first time she ever sang in public - a four-song set, which included songs in French, Spanish, Yiddish, and a gospel standard in English - Chava Alberstein has been a performer of "World Music."

Chava has released more than 40 albums in Hebrew, six of which have been awarded the Kinor David prize, Israel's Grammy. She has also released six albums in Yiddish, and an English album of standards ranging from Gershwin to Lennon and McCartney.

A dozen of the records have gone gold, six platinum, and one triple platinum.

Alberstein's early Hebrew recordings, with names like "Songs of My Beloved Country," "Beaches," and "Like a Wildflower," speak to Israel as a fledgling country. They are external, almost frontier.

"Israel was like a little child in those days," Chava recalled. "Discovering all the parts of her body.."

"If we have a true folk singer, it is Chava Alberstein," Yediot Aharonot, Israel's largest daily newspaper said about Alberstein, naming her the most important female musician in Israel's history.

With a half century of life and song under her belt, Chava Alberstein, like Israel, has come to understand that good art, like good state craft, is best achieved by looking inwards and outwards. She is a singer who accomplishes that greatest, most precious rarity of all: she speaks for a culture, a tradition.

“Everything is good only in the proper measure,” Chava sings in one of her songs. It seems her career is yet to see tremendous achievements.

Chava Alberstein’s album, “Foreign Letters”, produced by Ben Mink, was released on French label Naive in September 2001 and in North America on Rounder/Universal on December 11, 2001. “Voices, A Musical Celebration” a Public Television concert special starring Chava Alberstein aired world wide starting November 2001. Her latest album, "End of the Holiday" (Motzai Khag), was released in Israel to rave reviews and will be released on Rouner records worldwide in January 2004. In September 2003 a box set with Chava's earlier recordings was released in Israel. The box includes over 200 songs never before released on a CD format.

"At it's session on the 2 day of March 2005, the Senate of Tel Aviv University resolved to honor CHAVA ALBERSTEIN in recognition of her illustruious career spaninng forty years as an icon of Hebrew folk music; her distinctive vocal qualities and broad repertoire which have an enduring appeal to diverse sectors of Israeli society, old and young alike; her rigorously high standards as a singer and songwriter whose body of music includes over 50 album recordings; her endearingly modest performance style; and in special recognition of her revival of Yiddish music as part of the Israeli and Jewish cultural legacy; her exacting choice of songs that express a personal, social or political message, her originality and constantly evolving artistic persona; and her contribution to the musical canon and to Israeli culture at large, by conferring upon her the degree of DOCTOR PHILOSOPHIE HONORIS CAUSA of Tel Aviv University"