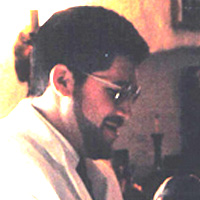 Hazzan Howard K. Glantz is a native of Hartford, Connecticut, and a graduate of the University of Massachusetts at Amherst. He received an additional Bachelor’s degree from the H.L. Miller Cantorial School at the Jewish Theological Seminary of America in Sacred Music, as well as Investiture as a Hazzan of the Conservative Movement. Howard is also a graduate of the Brit Kodesh program at the Jewish Theological Seminary and received certification as a Conservative Mohel.

Hazzan Glantz is frequently featured as a soloist with the Yavneh Ensemble, the Elkins Park Jewish Community Chorale and the Bux Mont Chamber Orchestra. Last spring, under the musical direction of Hazzan Tilman and the narration of Thedore Bikel, Glantz sang the title role of Theodor Herzl in Dori:The Life and times of Theodor Herzl, a collaboration of composer Elliot Weiss and librettist Eric Blau.

Hazzan Glantz and his wife Dayna reside in Elkins Park, PA together with their children, Rafi, Remy, Rose, and Rory and dog – Fudgie.