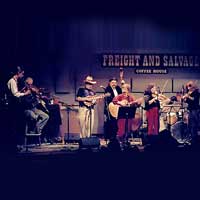 Klezmer music had its origins as the party and dance music of Yiddish- speaking Jews of Eastern Europe. Combining ancient synagogue modes with Greek, Romanian, Russian, and other music helped create its unique sound. Thought to have nearly disappeared, recent years have seen an amazing rekindling of a musical flame that was almost extinguished. California Klezmer represents one of the embers that has helped both keep the music alive and propel it into the 21st century.

Bringing together many years of musical experience, the band is equally at home with traditional Yiddish folksongs and instrumentals, Yiddish and Yinglish versions of Rock & Roll songs, and its own original compositions. On a musical magic carpet ride, the band can take you from a shepherd’s meadow in Romania, to a wedding in Babroisk, to Yiddish doo wop singing in New York, seamlessly weaving modes and moods

The band has played in a variety of venues, including the San Francisco Jewish Film Festival, the Hollywood Bowl Children's Ethnic Music Series, the Freight and Salvage Coffee House in Berkeley, Crown College at UC Santa Cruz, the Berkeley-Richmond Jewish Community Center Music Festival, as well as in many synagogues. California Klezmer also plays frequently at community celebrations. Many people have danced to their music at weddings and bar/bas mitzvahs, where the band can also play music from the 20s through the 60s.