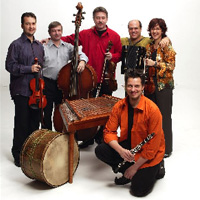 Tamás Gombai, Violin
Born in Dunaujváros, Hungary. Classical studies at the Béla Bartók Academy of Music and the Musical Faculty of the Lóránd Eötvös University. Degree in Music Education. Specialist in the music of the Carpathian Basin and Eastern Europe. Member of the Hegedös Ensemble, Hungary since 1994. Featured Guest Artist with the renowned Lindsays Quartet in Sheffield England with the Hegedös Ensemble. On and off-stage musician with the Hungarian National Theatre. Choir leader. Ongoing participant in Hungarian and International Music Festivals. MC: Ujstilus: Vásárfia; CD: Hegedös: Sok szép napot éjszakával; The Rough Guide To Klezmer; Budowitz: Wedding Without A Bride.

Cookie Segelstein, 19th Century violin and viola
Received her Masters degree in Viola from The Yale School of Music in 1984. She is principal violist in Orchestra New England and assistant principal in The New Haven Symphony Orchestra. Cookie teaches klezmer fiddling at Living Traditions' KlezKamp, has been on staff twice at Centrum's Festival of American Fiddle Tunes in Port Townsend, Wash., and teaches a klezmer class at Educational Center for the Arts in New Haven, Connecticut. She has performed with The Klezical Tradition, The Klezmatics, Frank London, Klezmer Fats and Swing with Pete Sokolow and the late Howie Leess, Kapelye, Margot Leverett and The Klezmer Conservatory Band. She is the founder of Veretski Pass and also a founding member of Hank Sapoznik and The Youngers of Zion. She has presented lecture demonstrations and workshops on klezmer fiddling all over the country, including at Yale University, University of Wisconsin in Madison, University of Oregon in Eugene, Pacific University and SUNY-Cortland. She was featured on the ABC documentary, “A Sacred Noise”, heard on HBO’s “Sex and the City”, and on several recordings including the Koch International label with Orchestra New England in “The Orchestral Music of Charles Ives”, the Veretski Pass self titled CD, Protocols by The Youngers of Zion, Hazònes with Frank London, and Adrianne Greenbaum’s “Fleytmuzik”. She is also active as a Holocaust educator and curriculum advisor and has been a frequent lecturer at the Women’s Correctional Facility in Niantic, CT.

Sándor D. Tóth, Violin, 3-String Viola
Born in Kiskunfélegyháza, Hungary. Has studied and played Hungarian folk music since 1982. Member of the group, Méta from 1985-1987. Member of the Hegedös Ensemble and the Hungarian Army Folk Ensemble with worldwide performances in South America, Mexico, Russia, the UK and Europe since 1987. On and off-stage musician for the Hungarian National Theatre since 1987. Regular participant in Hungarian Dance House CD?s. LP?s: Hegedös: Tündérkert - Hungarian and Rumanian Folk Music From Transylvania, 1988; Fele-más: Folk Music From The Carpathian Basin, 1993; Last Inventory; Hegedös: All The Good Days And Nights, 1998; The Rough Guide To Klezmer; Budowitz: Wedding Without A Bride.

Zsolt Kürtösi, Cello
Born in Budapest. Classical piano studies at the Ferenc Liszt Academy of Music. Piano instructor from 1977-1980. Member of the Hungarian Army Folk Dance Group since 1979. Member of the renowned folk music ensemble, Hegedös, since 1984 with worldwide performances in South America, Mexico, Russia, the UK and Europe. International performances on double-bass and 'cello. On and off-stage musician with the Hungarian National Theatre since 1984. Numerous film score performances. Collaborations with Márta Sebestyén and Katalin Szvorák. LP's: Hegedös; Tündérkert: Hungarian and Rumanian Folk Music From Transylvania; Fele-más: Folk Music From The Carpathian Basin; CD's: Hegedös: Last Inventory; Hegedös: All The Good Days And Nights; The Rough Guide To Klezmer; Budowitz: Wedding Without A Bride.