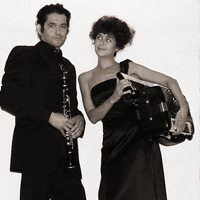 Although classical in its composition, the quartet are aiming for a folk sound. A special manner of performing, traditional instrumental styles copied by the voices, form the unique Ashkenazim style. A style which is recognisable from the first few bars.

Since their beginning in 2001 they"ve performed in dozens of cities of the Former Soviet Union, USA, Canada and Europe, and recorded 3 CDs.